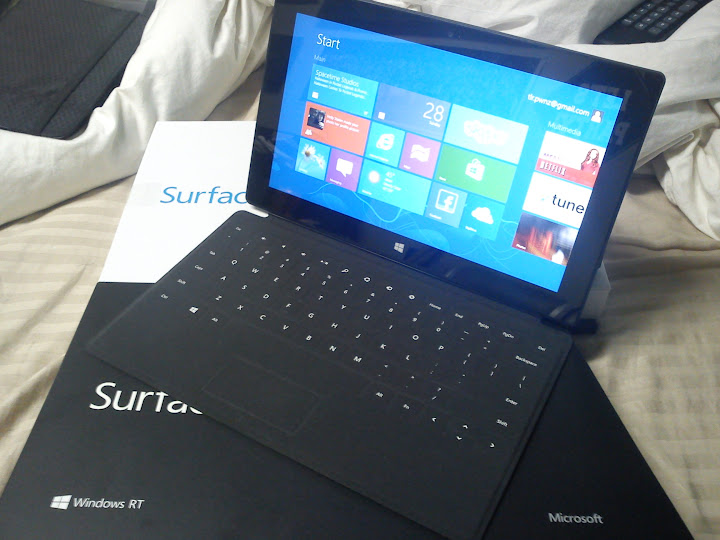 I’ll admit, when I first looked into reviews for this, I let myself be completely susceptible to believe what reviewers would say about this. The Microsoft Surface had a big claim to fill, and a lot of people who would be extremely unhappy to have it meet it’s claims because then the tablet market would be compromised.

And with something making a claim as big as “The Best of Both Worlds,” fulfilling the demand definitely would mean the entire tablet market could become one-sided. But does it deliver upon these powerful claims?

Before assessing the failures and successes of the Microsoft Surface, lets first detail what this needs to have:
• Solid, firm and elegant build quality
• A large variety of software
• A level of user-friendliness that makes it easy enough to use for a casual user
• A level of perplexity such that it isn’t as limited as other tablets for the serious business crowd
• Accessory compatibility for any and every occasion
• Service integration
• Natural, intuitive gestures that happen without thought
• Fluid, problem-free software operation 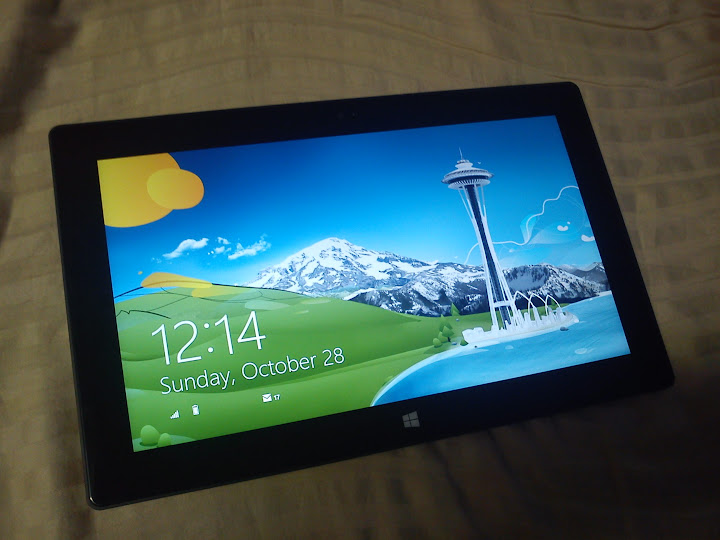 The Microsoft Surface of present is a Windows RT device that weighs in at just over 670 grams (a little over a pound and a half) which is very evenly distributed such that there will be no ergonomic complications when holding it regardless of whether it’s held in horizontal or vertical profiles. The build quality is incredibly solid and it has the look and feel of a luxurious device. The screen’s cover material is very sturdy, very easy to clean, and it’s VaporMg housing makes for a very compact feel which feels surprisingly good considering what all is packed inside. It’s 10.6in screen doesn’t boast a relatively large resolution per sé (1366×768), yet at the same time it’s very appropriate. Everything looks very sharp and crisp, and has the matching contrast ratio/refresh rates such that the only people unsatisfied would be the purposely irrational. With that being said, the superior aspect ratio allows us to enjoy a view that is comparatively greater for ditching letterboxed video or saving us some scroll-time when we want to access additional content on a webpage. 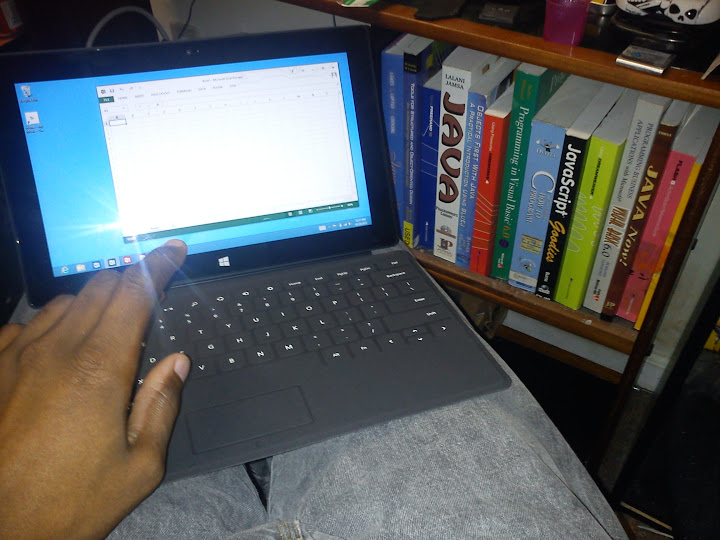 Despite what I’d heard prior, the notion that this would absolutely not set on a lap for those looking to replace a laptop turned out to be factually incorrect – trying it for myself yielded a very functional, natural and comfortable-feeling lap-mounted experience.

This is an absolutely huge contributor for establishing the ultimate tablet aide for the professional group who absolutely can’t make compromise for work situations, and those who plan on using this as a do-everything assistant for those college students who want in on the tablet madness. Paired with many of the native Windows 8 features, this definitely is looking to steal the crown for the best possible option for people regardless of whether their motive is work, school, media consumption or play.

Storage options presently range from 32GB to 64GB, with an expandable SDXC card slot that can support up to an additional 64GB. The battery is a 31.5Wh monster that, even on this drastically more sophisticated OS – manages to deliver a whopping 8-10 hours. The device is equipped with both front and back cameras which record in HD, but don’t particularly deliver any degree of mindblowing still-shot quality.

The Windows RT experience underlying this product struck a lot of fear and skepticism mainly because people would think the new interface comes at the sacrifice of something. While legacy software cannot be installed on Windows RT, everything else is certainly in place from the classic-style desktop to the control panel and task manager… and with quite a lot of bonuses that absolutely do not come with any prior version of Windows! 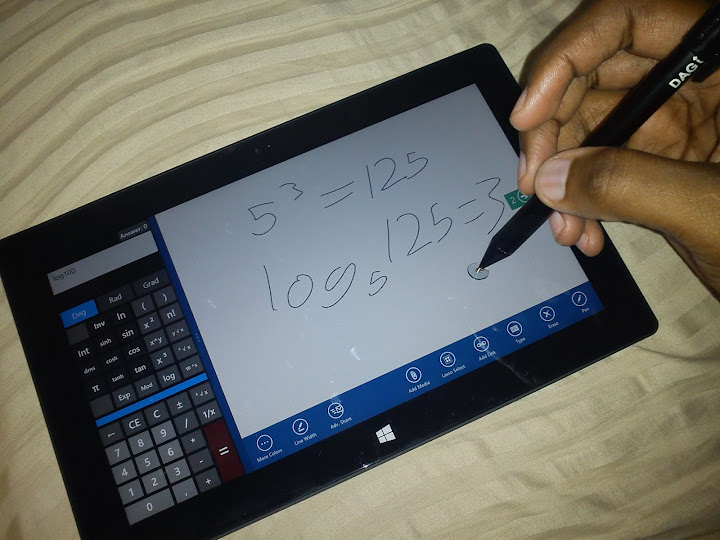 When they say the Windows experience has been completely re-imagined, they definitely do mean it… and for more than a few people, this only triggers the “Oh lord, what did they screw up this time?” reaction. I’m more than glad to say there’s more bonuses than anything. First of all, the interface has been drastically simplified to the point in which everything is convenient, fast and easily-accessible. While this is easily the most beneficial to casual users that don’t want to get really deep into computers, it can be a huge sigh of relief for those of us who actually know our way around computers too.

While one swipe from the right will easily reveal an artillery of charms holding our “Search” charm, a Surface equipped with a keyboard can start typing while on any part of the “Start Screen” and a universal search process (which is far smoother than any search option in Windows history) will ensue that allows us to easily find anything. Regardless of any of experience, this is something that can be appreciated. While there is not much we can customize to escape the tile-filled wall of icons, what’s there can be customized to be both elegant, informative, useful and even quite fun!

The days of going to a website to install an application is gone… on Windows RT anyway. And there’s two ways to look at that. It is a sacrifice, but at the same time, the process of having to scourge the internet trying to hunt down a program has been overtaken by the Windows Store; which will consolidate all applications into one easy-to-navigate source, while also offering some free trials of full software! 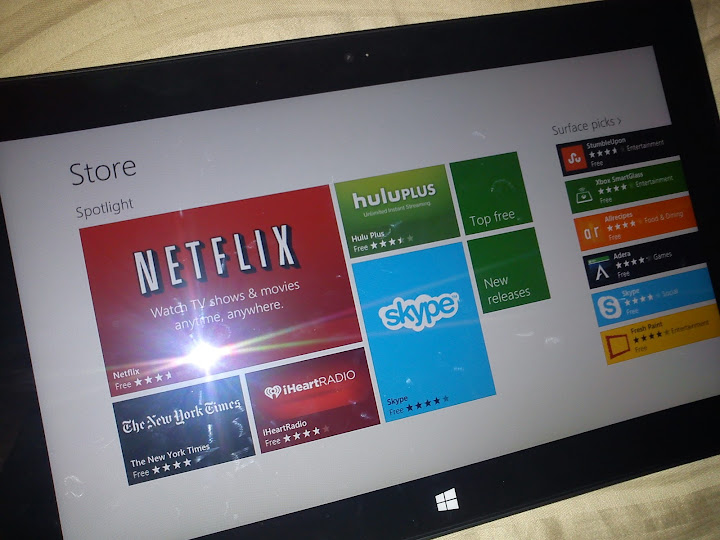 Of course, this ecosystem only works if the software selection is actually noteworthy, and worrying that it wouldn’t be would be an extremely rational fear especially seeing as the Windows Store is – in fact – still in it’s infancy. I’m glad to report though that there’s actually a surprisingly vast amount of content to behold here!

Even more impressive than the software itself is how things work. There is definitely a level of consistent fluidity littered through the operating system and it’s software, and after an extended session – trying to go back to any OS that does not feature such natural-feeling gestures becomes a trial in frustration. While doing comparative evaluation between this and a couple other tablets I own, I’d catch myself habitually performing many of Windows 8’s gestures only to feel disoriented when they did not have the same effect. Intuition aside, there’s OS-uniformal features like charms and snap that send the tablet experience soaring to a level that’s absolutely untapped by any other. For example, I’d begun trying to demonstrate it’s finesse in gaming with a session of Soulcraft while taking a Skype video call and learned just the extent of how capable this quad-core beast is.

This is all getting quite preachy, isn’t it? Let’s piggyback off a former mention and talk about… fun! We can do work all day on this, but all work and no play makes Jack a very dull boy. During the Microsoft Surface keynote, they made a big emphasis on the Netflix app… which I’ll admit was a huge “Who cares?” moment for me. Netflix is so in-exclusive now that it’s long since begun being a pre-installed service for many devices. What I didn’t expect was that; for the first time ever, Netflix would actually be a smooth experience – just for us. That’s not all though, the same level of smooth-ness persists throughout music listening, video, web browsing, and multiple combinations within.

But how about games? If this thing, at all, expects to be a supplement for the needs a PC owner will have, games will eventually have to become a part of the equation. With that said, I’ll admit something about myself – I love going into absurd levels of excessiveness just to see how capable something truly is. For this Microsoft Surface review, it means making sure the gaming potential does not exclude touch control, but also does not stop at standard keyboard&mouse input. 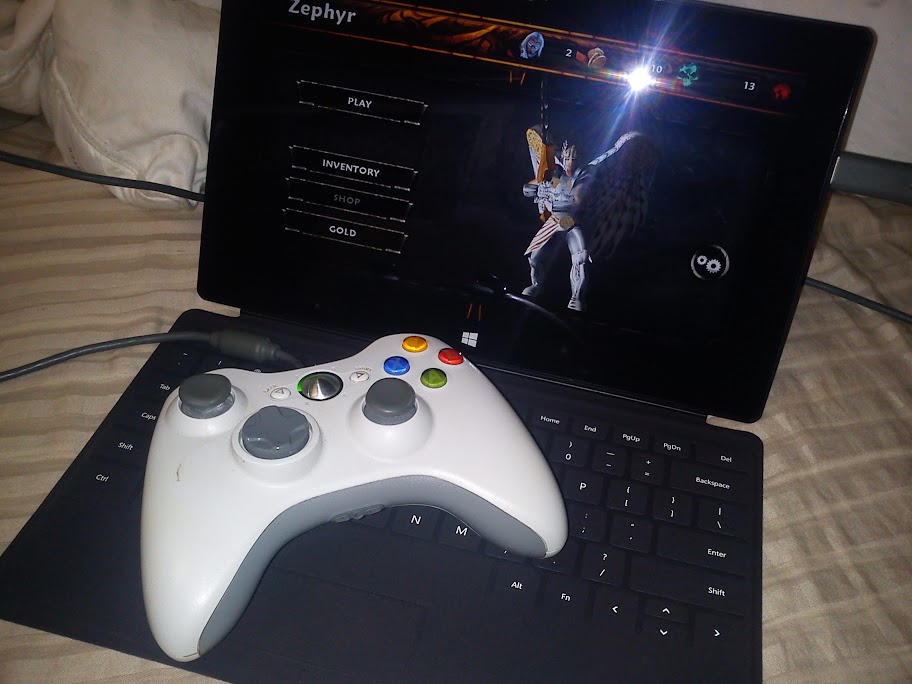 Soulcraft… natively working with a 360 controller?

Mind you, this is just one game (and the only game I’ve installed thus far) but if this is any indication, we do have a proven system that can be casual enough to play with touch controls, premium enough to accept keyboard/mouse input… or we could even go the extra mile and turn the Surface into a gaming console with an XBOX 360 controller+HDMI output straight to the big screen.

That’s a lotta stuff this thing can do! To briefly recap, it can be a professional workhorse, a book reader, a competent college aide, a casual media consumption device, or even a home gaming console. Diversity’s getting very, very near being at it’s finest with the Microsoft Surface.

Alas – the Surface does does have it’s imperfections. I wouldn’t be doing anyone justice if I didn’t re-iterate that this is still Windows RT – and being so it’s at the mercy of the Windows Store. Again though; while being at the mercy of anything doesn’t particularly sound appealing, the Windows Store offerings are already proving not to be a pushover – even with it being the newcomer. As someone who’s profession is in web development, finding that there was no FTP software presently was quite a huge back-draw (even if my media editing and code writing needs were fulfilled)… but it’s quite unfair to judge this device overall by a dynamic factor which hasn’t had the time to explode just yet so we’ll move on. A more nit-picky mention is that; while we can create shortcuts from Internet Explorer straight to the Live Screen… it seldom brings the website’s icon with it. I can see why something so capable would have no need for a dedicated YouTube app, but something just rubs the wrong way when a custom Live Screen placement fails to include the accompanying icon.

With that said, the Microsoft Surface has already fulfilled many needs in the areas of both work and play… areas that other leading tablets have not quite fulfilled just yet… and as the Windows Store grows it’ll be no surprise to the truly future-sighted if the Microsoft’s Surface ushers in a generation where Windows 8 monopolizes the market.

7 responses to “Microsoft Surface Review is it truly “The Best of Both Worlds”?”